Mexico City Metro Overpass Collapses, 23 Dead
At least 23 people died and 79 were injured Monday when part of the Mexico City metro system collapsed onto a roadway. Train cars fell about five meters onto the busy street below.
Four bodies were trapped inside a train car but rescuers could not remove them. One concrete support broke as the train passed over the railroad causing the accident.
Marcelo Ebrard is Mexico's Foreign Relations Secretary. He called it "the most terrible accident we have ever had in mass transportation." Ebrard was Mexico City's mayor from 2006 to 2012 when the collapsed railroad was built.
The current mayor, Claudia Sheinbaum, said investigators are working to find what caused the support to break. A large earthquake in 2017 may have damaged some structures. Sheinbaum said children were killed in the accident. 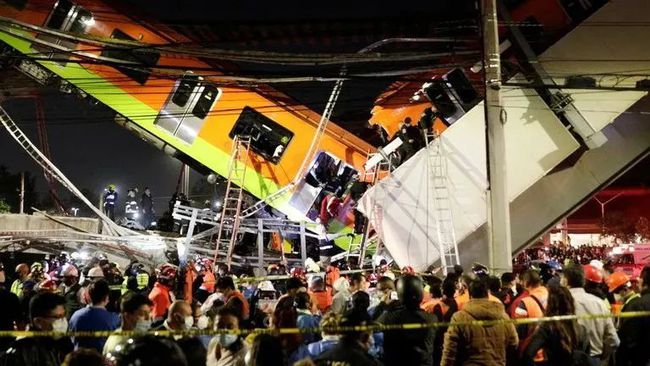 Mexico City's metro system is one of the least costly, and busiest, in the world. There have been two serious accidents in the recent past. In 2020, one person died and 41 were injured when two trains ran into each other. Another crash between two trains in 2015 left 12 people injured.
People who had not heard from their friends and relatives waited at the crash site Monday into Tuesday hoping to hear news.
Adrian Loa Martinez was there. He said his mother told him that his half-brother and another relative were in a car passing below the train when it fell. He thought his half-brother was crushed to death.
Gisela Roja Castro said she had not heard from her husband who takes that train home from work. "Nobody knows anything," she said.
The collapse happened on the city's newest metro line known as Line 12. Like many metro lines, it runs underground in the center of the city and runs above ground on concrete structures in surrounding areas.
The line has been criticized for construction and design problems. Ebrard was mayor when the train line was constructed. He said he is willing to help the investigation in any way he can.
I'm Dan Friedell.