Deep in the inky depths of what's called the ocean's mesopelagic zone, more than 500 meters below the surface, the main source of light is not the sun—even during the day. Most of the light comes instead from bioluminescent organisms, creatures that produce their own light. It's in these dark depths that southern elephant seals love to feast on squids and fish.

"Initially we wanted to know how elephant seals find their prey in the dark."

Thanks to data-logging technology, researchers have a fairly good handle on how far elephant seals travel to feed—and how long and how deep they dive. But nobody really knew how they find their prey in the darkness. Do they track the lights? Or is something else going on?

"So we built a sensor that could pick up flashes produced by animals that were being hunted by the elephant seal, because we thought that elephant seals might be looking for that light to catch a snack." 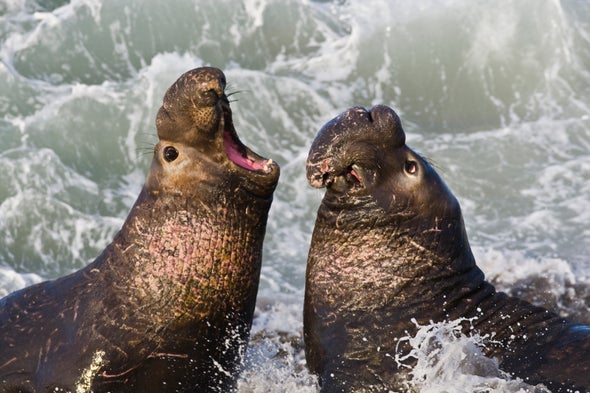 But it turned out that the fish actually used their bioluminescence to disorient seals after the seals began their attack.

"The thing is it seemed that the flashing prey were harder to catch than the nonflashing prey—which we found out by looking at the duration of the chase, which was longer for flashing prey."

The fish flash was always emitted just after the seal launched an attack, making it a defensive, reactive maneuver to distract the seals. But at least one seal learned to turn that liability into a hunting strategy.

"This seal appeared to be a master in catching the flashing prey, because each time it tried to catch a prey, first it would do this little head movement that was probably mechanically sensed by the prey. Then it would induce the prey to flash, because the prey reacts to this approaching predator."

This seal would twitch her head, see where the light came from and only then start the chase.

So even if some seals can use bioluminescence as a way to find food, for most the light is a distraction. Goulet thinks that seals probably rely more on their whiskers to sense the movements their prey make in the water.

"It's just a step forward into understanding what's happening in these depths, in this ecosystem that we don't really know much about—especially in the Southern Ocean."